Don’t get too carried away with the title of the blog. After leaving a cold UK and two seven hour flights with Emirates via Dubai I took my first steps in the Far East.
Singapore is beautiful. Clean with no litter, chewing gum spattered pavements or cigarette butts. Why can’t the UK be like this? The island still has a colonial feel to it in parts and we couldn’t visit without a trip to Raffles for a Singapore Sling at an eye-watering $34 each. I have OCD tendencies and the peanut strewn floor did nothing to help this. As I walked across the bar and felt my feet crunching I wanted to find a brush and sweep the floor clean. Tradition it may be but it just doesn’t seem right in a country so clean. Raffles is looking a bit sad as it is in the midst of renovation work. Hopefully, a return visit to see it in its new clothes will be part of holiday plans in the future. 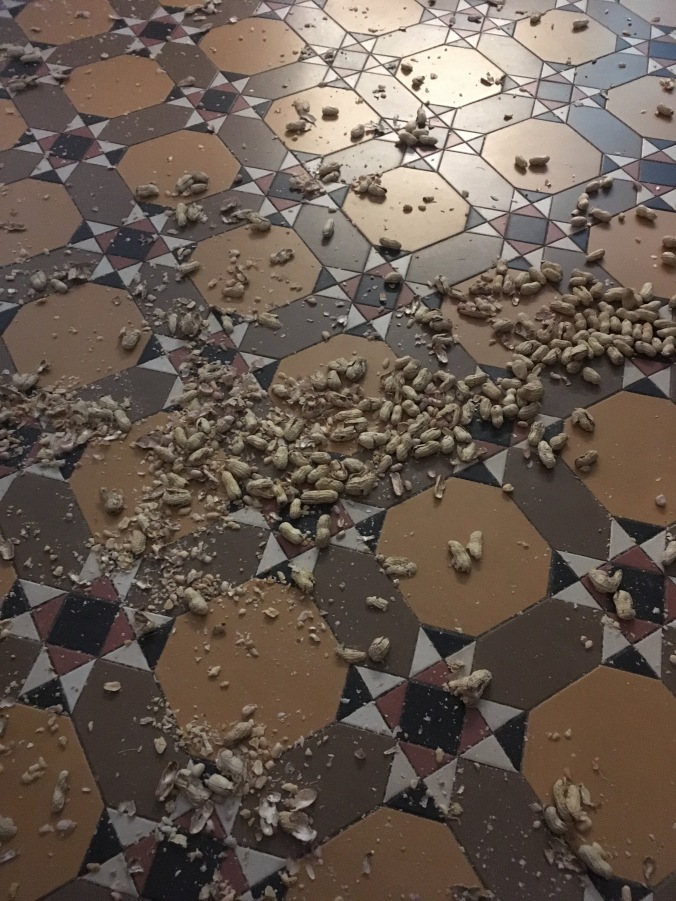 The skyline is dominated by the Marina Bay Sands Hotel – why would you build a hotel and put a ship on the top? Is it a 21st Century Noah’s Ark for when the sea level rises and the chosen few can sail off into the sunset?

My favourite parts of Singapore were the Gardens by the Bay with the Supertrees lit up at night and the Botanical Gardens. Both had a certain magic but for different reasons. Every night there is a light and music extravaganza in the Gardens by the Bay. We arrived just in time to hear the Christmas Edition of the show. Lying horizontal beneath the trees watching the changing lights with the sound of Santa Claus is coming to Town and Last Christmas seemed so wrong in temperatures of 30 degrees Celsius. Unlike the hundreds of people who watched the spectacle through their cameras, I attempted some mindfulness and lived in the moment. Magic. 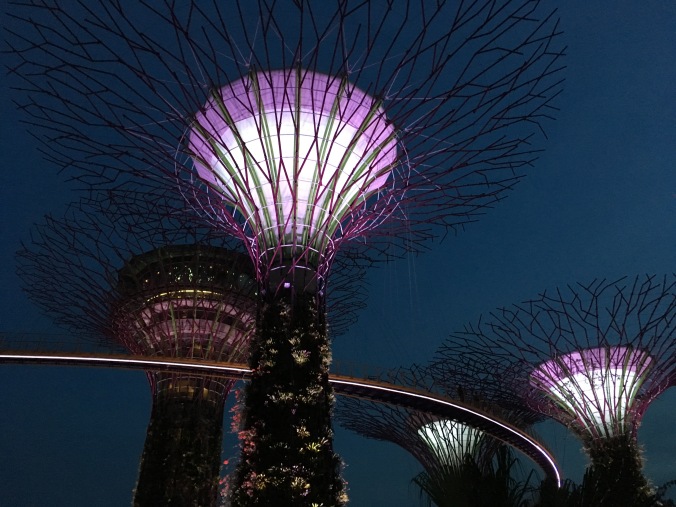 Although much is made of the Flower Dome and Cloud Forest, I wasn’t too impressed. It was clever how it had all been constructed but the floral displays weren’t that mind blowing and it is really a tourist attraction rather than something for people who admire plants.
The other hand the Botanical Gardens house a wonderful orchid collection which is not to be missed. Although species named after both Margaret Thatcher and David Cameron were looking a little worse for wear. I wonder why? There is a wonderful stillness about the gardens with trees harbouring birds that you never see but hear. You could spend a whole day here just walking around and being at one with nature. 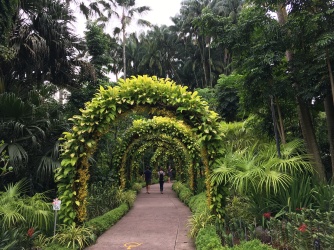 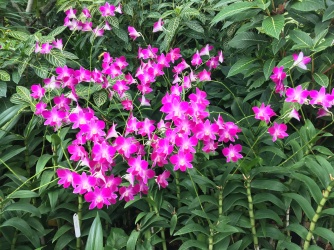 Out of focus orchids!
The Hop On/Hop Off Bus is a great way to see the city and we ‘hopped on’ halfway along Orchard Road which was ‘beginning to look a lot like Christmas’ with decorations and Christmas trees everywhere. A quick whizz around Singapore took us past the F1 racetrack, SunTech centre and a swathe of luxurious hotels.

Food is plentiful here with offerings for all tastes. We were lucky to go out for dinner with a past business acquaintance who took us to a fish restaurant next to the beach. Deep fried baby squid, followed by Black Pepper and Chilli Crabs was sublime. A mango dessert served on dry ice added to the spectacle. This was the culinary highlight of our trip.

Sadly we only had two nights here before we were off to the airport and our Qantas flight to Sydney. Having encountered high levels of service with Emirates, the Qantas offering felt a little like Ryanair. Luckily the flight was overnight and a combination of The Seagull by Ann Cleeves to remind me of home and some sleep we were soon landing at Sydney ready for our Australian adventure.